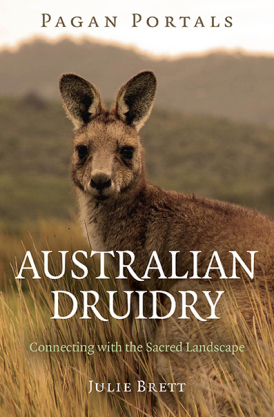 Being a Pagan or Witch in Australia is sometimes hard work. There’s not a blog or vlog by an Aussie of a Nature-based ilk that does not at least once stop to mention that the Wiccan Wheel just doesn’t work here in the Antipodes. There are no Gum Trees or Kangaroos in the Sagas or the Mabinogion, nor depicted on the walls of the Mediterranean temples. What ever does one do?

For the most part, the Witches of Oz simply choose the easy path. To get on with the work at hand, it is easiest to turn to the plethora of resources from the Northern Hemisphere, Europe and North America particularly. Even what we grow at home for magical work (let alone food), tends to be an import, and the Wild, Dark, and Wondrous continent we live on fades to the background; a pretty, colonial backdrop of terra nullius upon which we work with actual magical and spiritual stuff.

Julie Brett has done something else.

The seasons, animals and plants in Australia have a unique story to tell. Their messages are in no way less than those of any other land. The symbols of the Kangaroo, Dingo or Kookaburra are just as powerful as those of Lion, Wolf or Eagle. The wattle and the eucalyptus trees are just as important as the oak and holly. The seasons here are not ‘weird’ or ‘wrong’ because they don’t follow the systems laid out for the cycles of other places; they are just different, unique and special in their own way. (pp. 4-5)

I’ve had that same moment with one or two other books by Australian authors. And there really are only one or two others, along side a few more Aussie bloggers who broach the subject more fully. Very often though, this is where my moment ends, and once again, this sentiment proves little more than a polite commentary on what becomes the ‘pretty, strange, colonial’ backdrop for serious considerations of those other places, their wheels, their seasons, their plants and animals.

Here Brett goes on, to tell a new story, or perhaps a very ancient one, with new eyes and a new voice. Determined to take the Druidic praxis of her learning, and populate it instead with a myriad of new nouns like “kookaburra” and “boronia”. Very few exotic plants and noxious weeds feature in Brett’s considerations, and when they do, she doesn’t shy away from pointing out their foreignness. On the ubiquitous Oak and Holly King narrative:

We have considered the relevance of this idea for us, but as these are both non-native species and we don’t have any growing nearby, we have felt more connection with creating a new story. (p. 33)

And it is decidedly refreshing!

Brett’s writing is not unusual in the Pagan and Witchcraft genres. It is accessible and personal. I find the constant assurances in such writing that the reader ought to do as they feel, and the author is only making helpful suggestions, a tedious waste of paper, and Brett continues in this tradition as well. But I understand the need to do so. Particularly in this context where Brett has decided to address “Australian” practices, and really only details things that might help those of us living in the NSW Blue Mountain district, which, large area though it is, is a tiny fraction of what constitutes “Australian”. Here, her suggestions of diarising, journaling and keeping a nature diary are not particularly new, nor are there any fresh insights in process. An urban or suburban Witch or Pagan may find it difficult to get into the wild in the same way Brett has been able to living where she does.

These, however, are not the important aspects of Brett’s work.

Throughout, Brett stories her own journey, or a part thereof. In this, I found the

true jewel of her work. In countless others, if one removes the place names, one might easily make the assumption the author was British or American, their content varying not at all from the standard “how-to”s and Pagan 101s. You could do the same with Australian Druidry and you would not doubt where you were, that the writer was Australian. The practical is familiar, but the nouns left outside of place names, the bush, the animals and plants are all home, my home. And it was the first time I’ve read such a narrative. Anyone who has cause to write “she noticed a kookaburra sitting in a branch across the water. His eye settled on her and he was still. ‘Hello’ she said, happy to see her spirit animal” (p. 20) is to be celebrated!

Necessarily, Brett includes in this personal ritual narrative flashbacks to her own apprenticeship, which gives the reader the sense of the practice she is drawing from re-contextualised in the Australian bush. But it is structurally a little hamfisted and takes away somewhat from the ritual narrative set in the Blue Mountains bush. It is difficult to know if this is the result of a new author, or symptomatic of the nature of this discourse in Australia right now, which requires constant reassurance in regards to the authenticity of practices. Perhaps both, and I look forward to reading more of Brett’s work, more Australian work, where these sorts of references are not required to legitimise Australian Witchcraft and Paganism.

As an example to Aussie practitioners, it is simple and elegant. Clearly, Brett has a sincere love of her home, and of Druidry, and she weaves them together with respect to both. It is not to be understood as a “Druidry 101” though, it speaks to a very specific aspect of nature-based paths most especially, and that is seasonal observance and narrative. Importantly, seasonal observance does not require a singular narrative at all, though Brett has chosen to give it one in her practice. Her Wheel of the Year is innovative, inspired, and most wonderfully, recognisable to me as a New South Welshman familiar with Brett’s Mountain home.

Australian Druidry also serves as a resource for newcomers, and Brett’s lists of reading materials are, again, peculiar to Australia, all of which I am familiar with, but many new people to pagan paths may not be.

I would perhaps disagree with Brett’s approach or expression, but certainly not the premise. Working with Indigenous Law and Dreaming is hard as non-Indigenous Australians, and she touches on this, more thoroughly than any Aussie writer I’ve encountered to date. In ‘Part 3: Practicing Australian Druidry’ we’re given a practical guide to structuring a ritual designed to connect with space from a Druidic context. Of particular note to me here was ‘Honouring Indigenous Wisdom’. I think what I long for in relation to this is a simple acknowledgement of “rightness”, which Brett shies away from. Whilst we lack such an acknowledgement of Indigenous Wisdom, we will necessarily need to re-story, and re-make the wheel every time.  She writes:

As a guide, I have been told that it is always acceptable to share a[n Indigenous] story if it has been published, and it is considered respectful to acknowledge traditional owners of the story before you share it. (p. 86)

Yet, it seems we are still reluctant to do so, to simply take what we have been generously given, as Brett says (p. 85) and just truck with it as simply true and right. Instead, as many of us do (and I myself have done this same thing) Brett gives the polite nod to the offer of “a doorway into seeing how these ancient cultures viewed and continue to view the sacred energies of the land” (pp 85-86) and then proceeds to re-story it.

This is, however, the unbeaten path. I am not at a point along it myself that I can be at complete odds with Brett here, at all! And perhaps, given the vastness of our nationhood, and the many countries and languages and tribes that make it up, we will never have a practice so firm and fixed. It is commendable and altogether fabulous that Brett has brought this issue directly into the ritual space, and we, as non-Indigenous Australians, should continue this discussion, deepen and widen it entirely, thoroughly engaged with our First Nations brothers and sisters as true allies. The questions remain, largely untouched by Brett; can Indigenous Dreaming narratives sit inside the non-Indigenous pagan ritual space untouched? Can the European Myths and Indigenous Dreaming meet afresh in syncretic ways? Where does cultural appropriation start and finish in these scenarios? I fear we are a long way away from the answers to these questions, but Julie Brett is to be applauded for the start she makes towards them.

I ache for the weighty tome dedicated to Australian Plant and Root Lore. This is not that tome. But as someone dedicated to considering the Australian Native Flora and Fauna from within Western Occult paradigms, I know that was Brett has included here in Part 2, particularly the final chapters, constitutes no small amount of work! And kudos to her for adding to that work that one day may indeed fill that weighty, lengthy tome I so desire!

This is a quick read. Unlike other books, Brett does not waste space with the same ol’ same ol’, rehashed to within an inch of meaning. It’s a quick and easy read, very accessible to those new to the Pagan paths. And entirely useful for anyone living in Australia. I only hope that for Julie this is only the beginning of her pursuit of Spirit down the wallaby track. For myself, it is an effort greatly appreciated.

2016 is off to a rollicking start. I’ve been absolutely honoured to be able to function as Magistra of the …

This weekend past I had the very great pleasure of attending the wedding of one of my students, sister witch, …

Two things crossed my news/Twitterfeed/random online shares recently that touch on something that has become my personal point of paranoia. …

Oh Gods above and below! How long has it been since I last posted on A.I.? Too long! Three months is …

I’m a little bit behind on the Pagans Down Under blog-o-awesome prompts for the year. About a month behind. It …

Winter Solstice this year falls on Sunday 21st June. It is very often that this particular festival is a quieter …

I have had the very good fortune to read a great many things lately that I would share with others, …

When I first saw this topic listed for the Pagans Down Under blog-o-rama, I despaired. Lately, things have been slow …

As living organisms, we, human people, see a sharp line dividing the states of life and death. It is a …

This article was originally written for Ravens’ Call, The Tasmanian Pagan Alliance, Inc. magazine, Autumn / Winter 2015, No. 66. I …

Shop at Australis Incognita on Etsy